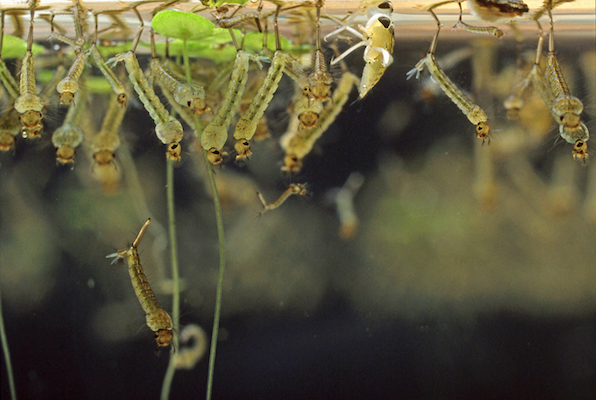 Drugs in our waterways, the bugs and beyond

Home > News > General News > Drugs in our waterways, the bugs and beyond

You could call it accidental pollution – it’s when medicines designed for humans find their way into rivers and streams, and are accumulated in insects and their predators.

In world-first research, freshwater ecologist Dr Erinn Richmond and colleagues detected dozens of pharmaceutical compounds in aquatic insects living in Victorian creeks. She also found that the chemicals can then move further up the food chain. The effects on native animals that are likely consuming these drugs are unknown.

The results have now been published in Nature Communications. Richmond and her team tested aquatic insects in six outer-Melbourne creeks for a range of 98 pharmaceuticals – the widest sample tested to date. She also tested riparian spiders that feed on the insects to see whether the compounds – including antidepressants, painkillers and blood-pressure medications – were travelling through the food web.

Traces of 69 pharmaceuticals were detected altogether, out of the 98 that can be tested at the Umea facilities. The most commonly detected pharmaceuticals in the insect larvae tested were memantine (a treatment for Parkinson’s), codeine, fluconazole (an anti-fungal medicine), metoprolol (for high-blood pressure and angina), and mianserin (an antidepressant).

The research is ‘a potential underestimate of what is out there, because we know there are thousands of different drugs available on the market’, Richmond says. ‘Drugs interact with each other, too. So they can combine to have a greater effect, or they can cancel each other out. We’re not sure yet. We’re yet to explore those different interactions.’

Globally, more than 600 pharmaceutical substances have now been detected in the environment, spanning all continents. And pharmaceutical use is rising as the population grows and ages. The effect on fish of pharmaceuticals such as antidepressants and steroids is the focus of the Monash Behavioural Ecology Research Group, headed by Associate Professor Bob Wong.

The Behavioural Ecology Research Group is now conducting a world-first multi-generational experiment, looking at how fluoxetine might affect guppy behaviour over an extended period. ‘We want to see whether these chemicals might shape the course of evolution itself by affecting things like the colours of the males, or the courtship displays, or the quality of the babies,’ Wong says.

Some of the fish will be returned to fresh water to see how long it takes them to recover. ‘If you get rid of pollutants in the water, are there long-lasting effects?’ Wong asks. In mice, for instance, researchers have found that female mate choice was influenced by their exposure to the contraceptive pill – even when it occurred three generations previously.

‘The drugs we take have a targeted physiological response on humans – that’s why we take them,’ says Associate Professor Michael Grace, Director of the Water Studies Centre at the Monash School of Chemistry, and a co-author of Richmond’s paper. ‘It’s now compelling to find out what effects the pharmaceuticals we take are having on these non-target organisms.’

For the full version of this article, pick up a copy of Future Water 2019!