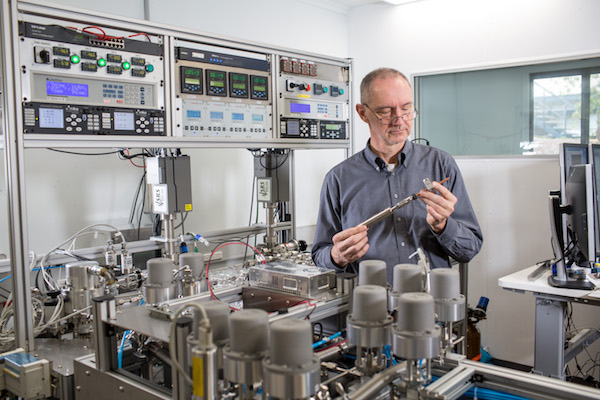 The gas trapped in Antarctic ice cores is known to provide unique insights into Earth’s ancient atmosphere. Perhaps lesser known is the value of gases in Australian groundwater – the terrestrial equivalent. That’s because underneath parts of our flat, dry, ancient continent runs – very slowly– some of the oldest water on Earth.

A new laboratory at CSIRO is now able to contribute to telling us the history of Australian groundwater, its origins and how it
has moved through space and time, with much greater precision and accuracy.

The Noble Gas Facility – the first in the Southern Hemisphere – provides an entirely new facility to contribute to Australian groundwater investigations. It has been a labour of love, taking physicists three years to build from scratch, especially adapted to Australian conditions.

What noble gases tell us about Australia’s ancient groundwater
CSIRO has a longstanding history with capability in the use of environmental tracers across various projects; however, historically, other existing environmental tracers used to investigate groundwater challenges have a limited range for dating old groundwater, are often not geochemically inert and provide limited information on recharge conditions; for example, the temperature at the time the water entered the underground system.

Noble gases are particularly useful in telling us about groundwater because they can be traced to show us how quickly, or slowly, water moves through underground aquifers; providing a better understanding of the connection between surface water and groundwater flow, and the replenishment of aquifers; and showing if water can move between shallow aquifers and deep underground aquifers through geological layers with low permeability.

Among the first water samples to be tested at the new Noble Gas Facility came from the Fitzroy catchment in Western Australia’s Kimberley region. It was part of groundwater analysis done for the Northern Australia Water Resource Assessment and aimed to identify the potential for, and risk of, increasing water-related development opportunities in northern Australia.

The hydrogeology and groundwater systems of the Fitzroy catchment is largely a greenfield region, which has never been properly characterised.

With the new facility, it’s anticipated that data from groundwater systems across the country will progressively paint a picture of the continent’s paleoclimate. As such, the facility also stands to contribute to a better understanding of climate change.

For the full version, make sure to pick up a copy of Future Water 2019!