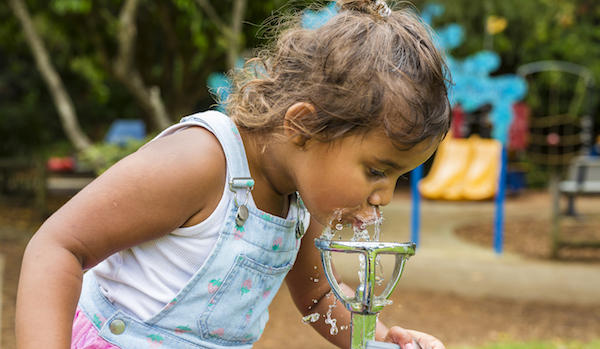 As the drought drags on, small communities in eastern Australia are turning to emergency water supplies. Often, this means bore water, which has prompted health fears over its high salt content.

As alarming as this is, drinking water right around Australia can have surprisingly high levels of salt. All capital cities have water salinity levels that are within the Australian Drinking Water Guidelines of 500 milligrams per litre; however, the guidelines do not regard salinity as a health consideration, but rather as an ‘aesthetic’ guideline, based on taste.

Water salinity is commonly reported as ‘total dissolved solids,’ which includes all organic and inorganic substances. ‘Salts’ are soluble compounds of sodium, calcium, potassium, magnesium, chloride, sulfate and bicarbonate. Salts enter our waters from everywhere: the ground, the ocean, the air and living creatures.

Regional and remote regions of Australia often have water with elevated salinity. Tennant Creek and Alice Springs in the Northern Territory and Geraldton in Western Australia are three regional Australian cities with sodium content higher than generally found in Australian capitals.

Where medical health professionals recommend a low-sodium diet, consumption of sodium through drinking water should be considered. If unsure of the sodium content of your water, and if you are on a low-sodium diet, then contact your local water supplier. This could also be a topic to discuss with your doctor or other healthcare providers.

Low-salt bottled water could be an option, but caution is needed. Apart from the expense, some commercial bottled waters also have elevated sodium levels. Check the mineral contents on the bottle label, and if you are on a low-sodium diet, make sure that sodium is low.

We suggest sodium should be treated as a health-related attribute of drinking water. It would therefore be monitored in every water supply, and could be usefully advertised. Most people have too much salt in their diet, and it is true that much of this comes from processed food. But in some locations, a surprisingly large amount can be from our drinking water.

This article is republished from The Conversation under a Creative Commons license. Read the original article at
https://theconversation.com/your-drinking water-could-be-saltier-than-you-think-even-if-you-live-in-a-capital-106054.